Saw this yesterday. I enjoyed it. I thought it did a good job of wrapping things up. Rey's "origin" was not anything I had seen predicted or expected, so it was a good surprise. As with any Star Wars there were some dumb parts and bad acting by some of the ancillary characters, but the main characters were good. I'm also glad that they
► Show Spoiler
did not actually unceremoniously kill Chewbacca in a semi-offscreen way
.
Top
wags83

I had so much stuff to talk about, but I think I've forgotten most of it already. I liked the movie and my theory from the last movie stands, the less you care about Star Wars the better these new movies are.

I loved anytime Ren and Rey fought each other from different places and their worlds met. I have no idea why they have this ability, but it looked cool each time.

I went to get a drank when Rey was doing the little boat over the wave and came back to her and Ren fighting for the 14th time. Then Leia died suddenly and he turned good. What did I miss?

I had to remind myself that she died IRL before the 2nd movie even came out and filmed nothing for this one, that was all extra footage. Also Disney promised not to CGI her into the 3rd movie...but not! They couldn't help but CGI that young Liea fighting sequence with young Luke.

I love Adam Driver. I'll make a thread about this later, but he's an actor that I will watch anything he does. Everyone go watch Marriage Story.

Did Finn have 3 love interests this movie? I assume he was gong to tell Rey he loved her in the pit, plus Rose, and then this new ex-storm trooper.

I have no opinion on Palatine coming back. Before this movie I didn't remember who he was.

Rey seemed so powerful in this movie. Floating. Healing. Pulling ships down. Flips and shit. Did Luke ever do anything like that? Fun fact: the Mando episode where baby yoda healed that dude played 2 days before this movie where Rey healed someone. They said something from Mando would play into this movie and it was that.

When I have more time I want to find my post from Last Jedi outlining all the things Johnson undid from JJ going from Force to Jedi, and then compare it with all the things JJ re-undid from Johnson's movie. It is laughable. Like mending the Ren's mask and saying the light speed ship missile was a million to one shot.
Top
Tyler

Rey was powerful because of her lineage. Personally I'm a bigger fan of the Rian's take on her lineage instead of this nepotism bullshit.
Top
DannyFanny

DannyFanny wrote:Source of the post Rey was powerful because of her lineage. Personally I'm a bigger fan of the Rian's take on her lineage instead of this nepotism bullshit.

And her/Ren had a special cosmic bond because their grandpas were once coworkers?
Top
Tyler

DannyFanny wrote:Source of the post Rey was powerful because of her lineage. Personally I'm a bigger fan of the Rian's take on her lineage instead of this nepotism bullshit.

And her/Ren had a special cosmic bond because their grandpas were once coworkers?

makes as much sense as anything else.
Top
DannyFanny

If Papatortellini didn't tell Rey his plan she would have killed him and he would have won. But then she did kill and and his plan didn't work. That was dumb. The script needed it to not work so it didn't then.
Top
Tyler

I don't really remember the scene because like I said I don't dissect these movies. I imagine it had something to do with her emotion. If she would would have killed him out of fear, hatred, or anger, his plan would have come to fruition. Since she killed him out of whatever emotion, a divine sense of justice... I guess, it didn't.
Top
DannyFanny

Tyler wrote:Source of the post Also Disney promised not to CGI her into the 3rd movie...but not!

I thought of this too....friggin liars

Tyler wrote:Source of the post Did Finn have 3 love interests this movie? I assume he was gong to tell Rey he loved her in the pit, plus Rose, and then this new ex-storm trooper.

I don't think he had a love interest with the ex-storm trooper - just shared experience bonding. His love interest with Rose was confirmed last movie and seemed to continue this movie, although they didn't play on it very much. There's always been a weird kind of tension between him and Rey which seems like a love interest angle, but they've never really addressed it. Did they ever say what it was he wanted to tell her? I had to pee so bad and couldn't hold it anymore at the theater, so I may have missed something when I was in the bathroom.

Tyler wrote:Source of the post Rey seemed so powerful in this movie. Floating. Healing. Pulling ships down. Flips and shit. Did Luke ever do anything like that?

Luke did similar things, maybe not to the level of Rey, but there is some precedent for those powers throughout the Star Wars universe I think.
Top
wags83

Was talking about the movie with a friend today who is also a big Star Wars fan. One thing that we came to the conclusion on - in this newest "trilogy," everything is so busy all the time. They seem to hop around the whole universe a lot more than ever before in other Star Wars films. Everyone in these newer ones are always in panic mode responding to imminent emergencies all the time and it seems like they never let a scene breathe.

Again, overall I liked the movie and have enjoyed this newest series. There's just always been something a little off to me about it, and I think that's it.
Top
wags83

I agree, everything is so busy. They are never on a planet long enough to establish anything.

No, the thing with finn never paid off. He never told Rey or Poe what he wanted to say. Pretty lame.

Listening to my nerd podcast about the movie and they hated it. It's hilarious to listen to die hard fans rip aspects apart.
Top
Tyler

The Falcon crash landing because it has no landing gear. Doesn't the Falcon ALWAYS have vertical landings and takeoffs?

The dagger (that Rey just happened to find because of crazy events) lines up perfectly with a broken death star. How?

How did they have the resources to build so many star destroyers? How do they have so many people to fly them?

Last movie no one answered their call to help. This movie everyone answers it and are all able to fly to this super difficult place

As for Finn and the quicksand thing.
According to the leaks, he wasn’t trying to tell her he had feelings, but that he was force sensitive and a scene showing that was also cut by execs.
Top
Tyler

Tyler wrote:Source of the post According to the leaks, he wasn’t trying to tell her he had feelings, but that he was force sensitive and a scene showing that was also cut by execs.

And yes, all those other points are stupid and I was thinking about them as I watched too. Especially the Star Destroyer fleet. I'm willing to suspend disbelief that they were able to gather enough resources to build them (dark side powers?). But they even addressed the issue of needing more manpower to operate them. There was a line about how they'll need to harvest more babies around the galaxy to be able to support the fleet. Are all those Star Destroyers being run by children?!?!
Top
wags83

Hyperspace skipping is the best example of everything that is wrong with Disney Star Wars: they think limitations and not being able to do something is boring.

Han Solo didn't hyperspace skip in A New Hope because that would have made the plot absolutely boring. "Oh, star destroyer on our tail? Better hyperspace skip out of this. And...done." "Oh, we're getting chased by TIE-Fighters from the Death Star? And...gone!" This limitation created tension.

Limitations make for a good story. Simply being able to do what looks fancy and has no substance makes fan fiction. It makes plots boring, predictable, and simply takes out all tension. Interesting things can happen when characters - all good and evil characters - need to work around limitations in their own way.
Top
Blue Jackets

That's a good point. I like how they half-assedly addressed that "You can't hyperspace skip in the Falcon!" "Apparently you can!"....ok, end of debate.
Top
wags83

wags83 wrote:Source of the post That's a good point. I like how they half-assedly addressed that "You can't hyperspace skip in the Falcon!" "Apparently you can!"....ok, end of debate.

The Falcon getting destroyed and repaired with ease so many times reminded me of Mando and how dum that was there too. Parts were literally ripped off his ship, panels were removed, there was nothing but a shell left of his ship. However, one wagon load and montage later...everything magically back together. Same thing with Falcon crash landing on that planet. Luckily all of the broken parts could easily be carried in the palm of your hand and they had them all on the planet.
Top
Tyler 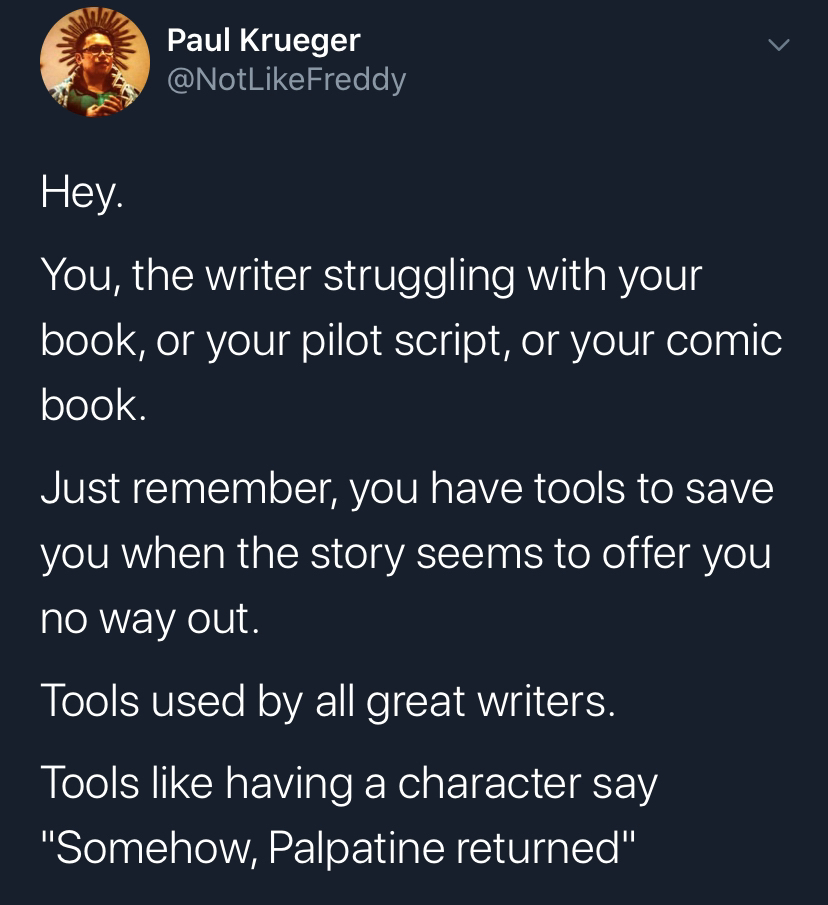 I read through this thread and im really surprised that nobody mentioned the fact that they can just voodoo teleport items across the known universe at a whim. As soon as the beads scene happened, i just stopped taking it seriously.
Top
cwilkins88
Post Reply
45 posts

Users browsing this forum: No registered users and 6 guests