This blows me away. Never thought a game like Red Matter could run on Quest and look so good

A lot of VR posts from me tonight since I played a bit.

It's such a process to play VR. The quest must be great.

Get out HMD. Unwrap cord. Get extension out from behind desk. Plug in cord. Get controllers out. Hope everything turns on and is working. Oh no, th boundry needs fixed. Now this game isn't working. Let me enter desktop mode via VR to try to fix it. Whoops. Cord got in the way.

20% of these problems I would still have with Quest since I want VR put away when not playing. 30% could be resolved if I only bought Oculus games and not steam (which Quest would force me to do). But that other 50%....
Top
Tyler

I haven't even played in over a month due to lack of time. But it is extremely easy to pop into VR for 15 minutes and play a quick game.

Re: RE: Oculus Quest (previously Santa Cruz) at OC5

bmyoungs wrote:I haven't even played in over a month due to lack of time. But it is extremely easy to pop into VR for 15 minutes and play a quick game.

Sent from my Pixel 3 using Tapatalk

Month drought is nothing. You'll play a lot once the slower season starts.

If you are reading this Jocelyn and notice a new box in the basement. I sold one of my other VR headsets to put towards this, my current allowance, and IOU for the next 2 months at 50% my allowance.
Top
Tyler

I got play around with it for about an hour last night. I am stealing the same talking points I used for RIft S.

Comfort
I would much rather wear my Rift S over this. The Quest isn't uncomfortable, but I wouldn't call it comfortable either. It doesn't fit my small head the best.

Tracking
Nearly flawless for me. This has one less camera than the Rift S, but I haven't played anything that made that noticeable. I had a little bit of a floating racket in the Sports Scramble demo, but that was just a one time thing.

Lens/Screen
On paper, this has a higher resolution than Rift S, but I haven't noticed that. In part because Question doesn't have the horsepower to pump out games at that resolution. Rift S uses an LCD screen and Quest uses OLED. OLED is the better technology for phones or TVs, but I think I prefer LED for VR because of the pixel layout. Noticeable increase over the Rift. Screen isn't as vibrant as the Samsung (OLED), but I think the picture is this is nicer because of the LCD RGB stripe.
I didn't notice any god rays. I'm not sure if these are the same lenses as Rift S, but I thought they were really good.

IPD
Physical adjustment! Yay! The software IPD hasn't been an issue for me on the Rift S because I have an average range, but it was nice to manually physically adjust IPD on Quest during setup.

Passthrough /Set up
This is just as magical as the Rift S. You'll be able to bring this to a brand new space and have it set up in less than 30 seconds. The black/white world is low def just life Rift S, but that doesn't matter. Tracking isn't to scale 1:1 in this view like it is for Rift S, but that doesn't matter. It works just fine to see the physical world when you need to.

Audio
I think the audio is better on this than the Rift S, which is insane. From what I've read the built in speakers for Rift S are limited by a USB bandwitdh issue. Since Quest is not plugged into a PC you can go louder. On the games I played I had to turn down volume. Yes, volume and quality of sound are very very different, but this is good enough for me. Maybe I will try headphones some day.

Controllers
Same controllers as the Rift S so nothing new here for me. I like the design, but miss the loop being on the bottom.

SideQuest
I'm a nerd so I had to get right into SideQuest. This allows you to add unsupported games/apps to Quest vis a PC connection. It has an easy to navigate interface and even includes some build in games. i used this to install Pavlov last night, but didn't have time to test it. The most time consuming part is setting up a special account with Oculus, but I had already done that from back when I sideloaded stuff to my Go.

Overall Impressions:
It feels better than I thought to play a game without being tethered. I'll post about some specific games, but it is so easy to get lost in my big play space because you don't have the cord wrapped around you or that you need to step over.

Resolution does take a hit though. I played Robo Recall and the gameplay is identical to the PC version, but visuals are a noticeable drop. When you are in the thick of it, it doesn't matter, but it is for sure noticeable. i would say Quest was 65% of the visual clarify of the PC equivalent for this game. However, games like Beat Saber look to be identical. I am excited to try out Rec Room. That has huge potential in Quest and would be great if it looked nice too.
Top
Tyler

Had the inlaws over on Saturday and all the kids were playing so much VR. Their cousin from the other side of the family came over and I felt like a god. "THIS IS THE COOLEST GAMING SETUP EVER"

It was fun watching 2 VR players in the basement going at the same time. PC was doing Job Simulator and Super Hot. Quest was doing Cloudlands 2. I could have had them both do Rec Room and play together, but I was doing too much support as it was. I didn't want to add a social aspect.

Seriously, I had to help someone every 4 minutes because they would accidentally leave the game or something. Evie loved putting the quest on and leaving the play area so the b/w real world came into view. She was just walking around talking to people through it.
Top
Tyler

Tyler wrote:Source of the post She was just walking around talking to people through it.

wags83 wrote:Source of the post Lol, what a dummy.

Nah uh! It's pretty cool to see the real world through the VR goggles. Quest makes this extra fun since it's not 1 to 1 scaling.
Top
Tyler

This case was like $21 bmyoungs. I wanted one but didn't want to spend $40 ok the official case 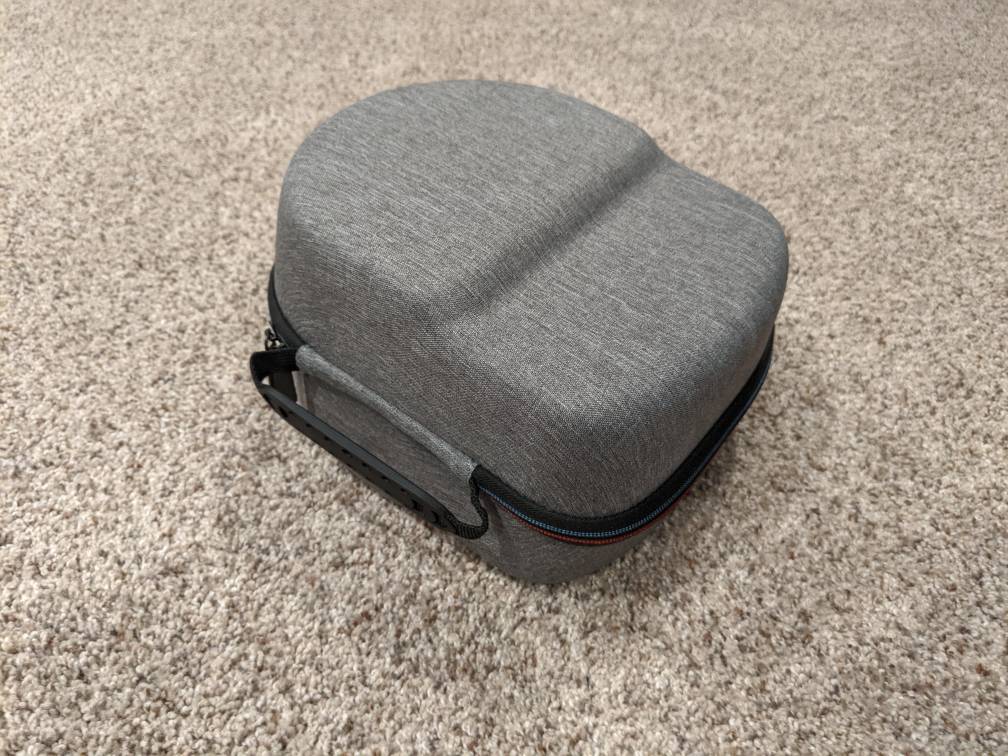 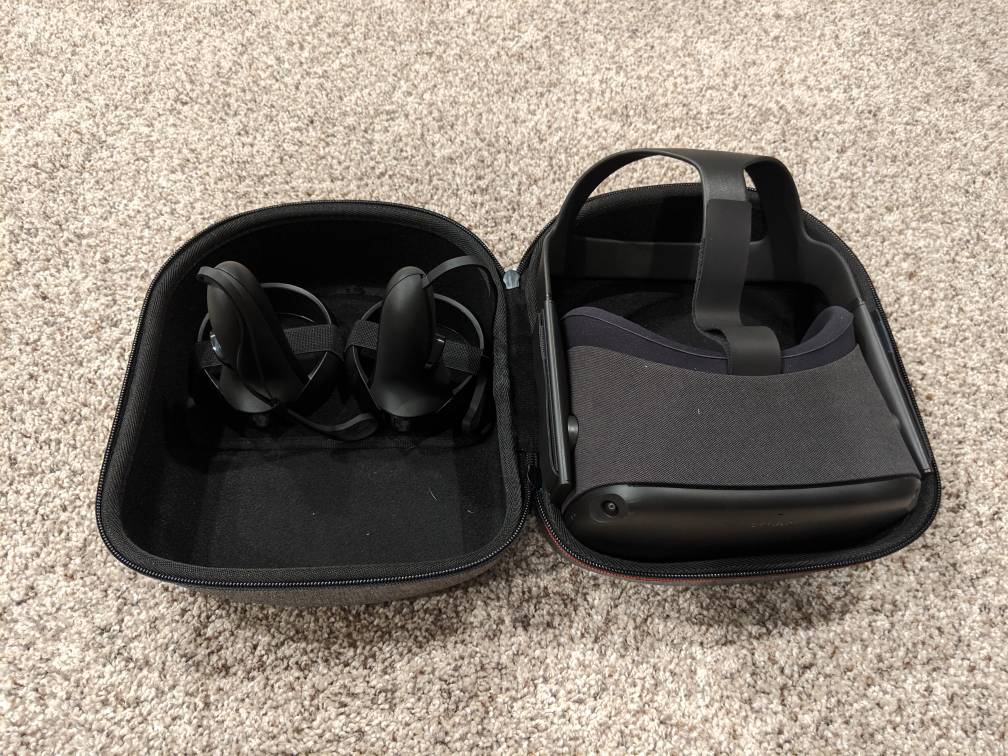 My 61/2 year old intoxicated dad just gave me verbal confirmation we will be buying him a quest tomorrow. He can't get enough of it. The main thing for him is ease of use. VR startup time is 5 seconds, not 5 minutes.
Top
Tyler

Tyler wrote:This case was like $21 bmyoungs. I wanted one but didn't want to spend $40 ok the official case

Damn that's actually pretty nice. I bought the Oculus one since nothing was available when I got mine.

I would rather have the Oculus one, but $40! It's all pretty tight in this and the headset needs to be on the smallest setting to fit
Top
Tyler

Tyler wrote:I would rather have the Oculus one, but $40! It's all pretty tight in this and the headset needs to be on the smallest setting to fit

bmyoungs wrote:Source of the post I would have bought any cheaper option too if I had a choice at launch

Quest has made it! Last week it was a product on The Price is Right and last night it sponsored Monday Night Football.
Top
Tyler

Yeah, I've been seeing commercials for the Quest on TV lately. I'm getting the itch to upgrade to the Quest....
Top
wags83

wags83 wrote:Source of the post Yeah, I've been seeing commercials for the Quest on TV lately. I'm getting the itch to upgrade to the Quest....

Once it supports the USB link option it will have parity with Rift S also while giving you the option to do the standalone. Of course you can also hack and do wireless PC VR, but you wont do that.

Rift S is more comfortable for sure though. I use my Quest quite a bit though, it's nice to play for 20 minute sessions before I start winding down for the night, whereas the Rift S isn't worth taking out for 20 minutes.

I dont think i have used my Rift S since getting the Quest. I should sell that....
Top
Tyler

Yeah, I'm not even considering the Rift S. There is nothing there that I would consider enough of an upgrade. The wireless operation + no sensors is what I'm interested in. Once Oculus Link is a thing, that will also be nice for the Quest.
Top
wags83
Post Reply
136 posts

Return to “Video Games and VR/AR”

Users browsing this forum: No registered users and 2 guests